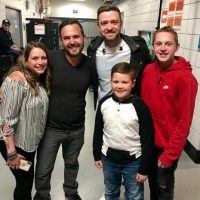 An Ionia County boy who beat cancer twice and created a video inspired by a song from Justin Timberlake got to meet the pop star last week.

Isaac Walker, 11, of Sunfield, and his family met Timberlake backstage before his concert April 4 at Van Andel Arena in Grand Rapids.

Fawnda Walker, Isaac’s mother, said her son was diagnosed with cancer at age 2. He relapsed when he was 8 and needed a bone marrow transplant.

On the way, the family heard Timberlake’s song “Can’t Stop the Feeling” and rewrote the lyrics to tell Isaac’s story, thank his donor and spread awareness to inspire others to become a donor.

“I got this marrow inside my bones”, Fawnda said was one of the lyrics.

The family rewrote the lyrics in the car driving to Texas to meet Isaac’s donor, said his father, Andrew Walker.

“We got mostly finished by the time we got there and Isaac actually sang it for Bailey and for his friends”, Andrew said. “They loved it and were encouraging him to finish the song and make a music video”.

Isaac made a music video of the song, “Can’t Stop the Flowing”, and it was released last fall with the help of the media department of Helen DeVos Children’s Hospital in Grand Rapids. The video was released by Be The Match and Michigan Blood with the family’s permission, Andrew said.