Pranks seem to be the trend du jour at Paris Fashion Week. Just a few hours after Gigi Hadid saved the runway at Chanel’s Spring 2020 show at the Grand Palais, Justin Timberlake was grabbed by a fan as he and his wife, Jessica Beil, made their way into the Louis Vuitton show at the Louvre. While the impromptu Chanel incident was more sly, People reports that Timberlake was actually on the wrong end of a prank from former Ukrainian television personality Vitalii Sediuk. 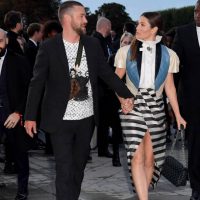 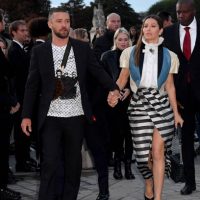 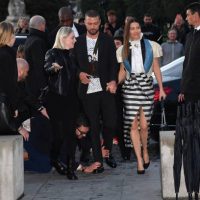 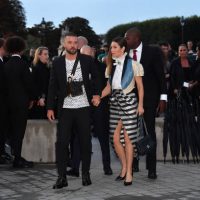 “He was not attacked. This is just getting blown way out of proportion”, a source told People. “Justin’s fine, the guy just touched his leg”.

Timberlake and Biel made their way into the show and everything was très bien. The couple is just the latest victims of Sediuk’s running gag. In the past, he’s crawled under America Ferrera’s dress at a premiere, he hugged Bradley Cooper and Leonardo DiCaprio, and he even made his way onto the stage at the 2013 Grammys, where he ended up beside Jennifer Lopez and Pitbull as they presented an award to Adele. While he’s clearly into all the attention, he told the Associated Press that he’s just a normal guy. “I’m a normal guy. I’m not crazy”, he said. “I’m doing this for fun”.

Sediuk ended up in prison after a 2014 incident when he got too friendly with Brad Pitt at the premiere of Maleficent. When Sediuk went in for a hug, he knocked Pitt off balance. The merry joker was charged with battery and unlawful activity at a sporting or entertainment event and spent two days in jail. He was sentenced to three years of probation and a year of psychiatric counseling.