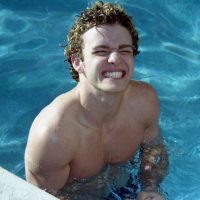 Justin Timberlake set a shirtless thirst trap for all the right reasons on Thursday (Oct. 22). The singer posted a pic from his *NSYNC heyday — when he was about 19 — in order to share a very important message: Vote. No, seriously, get out there a vote.

“I think I was 19 here. That would have been 2000… when I spent a lot more time in the gym It was also around the first time I voted”, Justin Timberlake wrote alongside the throwback snap of him smiling in a swimming pool.

There was a very good reason for the photo. Timberlake used it to encourage everyone to get out there and vote this year, as well as to endorse former two-term Democratic Vice President Joe Biden and his VP candidate, Sen. Kamala Harris. “It was also around the first time I voted”, he continued in his caption, recalling his first time casting a ballot. “I just remember thinking voting was cool, and it all felt very… adult — I don’t think I really understood the weight of it all or took the time to learn what my choices in candidates really meant. Now, I know how powerful each of our voices can be”.

To anyone out there who is voting for the first time, who thinks their vote doesn’t matter, or who doesn’t trust the process, the pop superstar assures you that you can. Then the father of two gave plenty of reasons why. “This is about our children growing up in a world where racism is condemned, not tolerated”, he wrote. “It’s about ensuring that women are empowered everywhere decisions are being made. We have to vote so we don’t go backwards”.

In addition to his enthusiastic endorsement, Timberlake also noted that he’s voting early — by mail — this year. He also included a link to the progressive youth voting initiative Nextgenamerica.