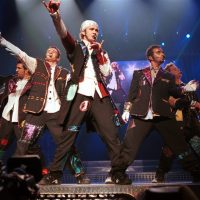 Like many singers who got their start in the ’90s, Justin Timberlake has more than a few unforgettable fashion memories he’d like to forget. But if the internet has its say, those iconic looks will live on for years to come.

The singer, who turned 40 over the weekend, recently took part in the Hollywood Reporter’s annual songwriter roundtable with John Legend, Mary J. Blige, Janelle Monáe and Leslie Odom Jr. During the hour6long chat, Timberlake recalled a panel discussion he participated in at Berklee College of Music and shared the mix of comedic and serious career advice he gave to students.

“I confessed that there was maybe a period in the ’90s where I could skip over some of the outfits that were public, but that the internet will never let me”, the former ‘N Sync band member said.

Timberlake took it all in good stride and played along. “Thanks, John. Uh, no, the internet won’t allow me to forget them. So it’s all good”, he said.

Legend, of course, was referring to the matching denim outfits that Timberlake and his then-girlfriend Britney Spears wore to the 2001 American Music Awards.

Last year, the singer appeared on his former ‘N Sync bandmate Lance Bass’s podcast The Daily Popcast and told his friend that he thinks the iconic look is still relevant, even 19 years later.

“I don’t know man, you could kind of rock that today”, Timberlake said. “Look, man, you do a lot of things when you’re young and in love, man. That’s what you do”.