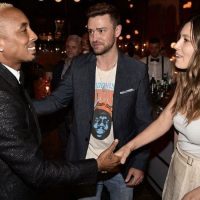 Jessica Biel didn’t walk the red carpet with husband Justin Timberlake at the Songwriters Hall of Fame induction ceremony, but she was there to support her man!

The 38-year-old singer was honored with the Contemporary Icon Award at the event on Thursday at the Marriott Marquis Hotel in New York City.

During his speech, Justin praised his wife, who has been the subject of headlines this week after she sparked a debate on vaccines.

“To my wife, who is here tonight and who has given me the greatest gift of love”, Justin said. “Our son is 4 now, and he’s dope too! I’ve written so many songs because of that that I’m so proud of and I just … I’m extremely humbled. I hope that I can represent this award for all of you”.

Jessica Biel joined well-known anti-vaxxer Robert F. Kennedy Jr. for a day of lobbying with California lawmakers on Tuesday. She later clarified her stance on vaccines.

Jessica Biel is not letting controversy put a damper on her mood. The actress stepped out for a fun-filled night with her husband, Justin Timberlake, after making headlines for lobbying with a well-known anti-vaccination advocate.

Justin Timberlake and Jessica Biel Through the Years

Biel, 37, and the “Mirrors” singer, 38, attended a party at Sadelle’s restaurant in New York City on Wednesday, June 12, to celebrate musician Dallas Austin‘s induction into the Songwriters Hall of Fame. The couple were all smiles as they had dinner with Jermaine Dupri, music executives Jon Platt and Jody Gersonand other celebrities.