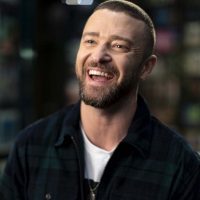 Timberlake took a break from recording new music to celebrate his Levi’s x Justin Timberlake fall collection and Levi’s Music Project partnership while gearing up for his role in the film ‘Palmer’.

While he has been busy with a multitude of projects, actor-musician Justin Timberlake stepped out on Tuesday night at Levi’s Haus in the Hollywood Hills to celebrate his latest partnerships with the heritage California denim brand. Among the guests at the intimate dinner of steak and pasta (catered by Felix chef Evan Funke) were the Haim sisters and Timberlake’s musical partners, including songwriter-record producers Rob Knox and Danja and guitarist Elliot Ives, who told THR that the band is spending time in the recording studio this week. (Timberlake recently revealed that he is teaming up with SZA, Lizzo and Meek Mill on new tunes).

The evening marked the launch of the 12-piece Levi’s x Justin Timberlake fall-winter 2019 Fresh Leaves collection (the musician’s third collaborative capsule line) featuring new takes on his signature hooded shirts, trucker jackets, cargo pants and a reversible down vest ($78-$380) with plaids and an orange camouflage pattern in the mix.

“When you work with such an institution like Levi’s, you don’t want them to be anything but Levi’s”, Timberlake told THR. “And so it’s just a little bit of a swerve here and there on fit or cut or wash or texture and that’s it. And then saying, wouldn’t it be fun to make a workman’s vest, for instance, or wouldn’t it be fun to throw a hoodie on a trucker jacket? For the first two seasons, we created a bit of a left-of-center aesthetic and we just want to continue to play up on that. … I like to mix things up always”.

While many guests sipped Casamigos, Timberlake screened a documentary that highlighted his work with the Levi’s Music Project, which the brand debuted in 2015, to support youth music education. In August, the 38-year-old musician (along with Ives, Knox, Danja and Timbaland) surprised students at the Stax Music Academy in his hometown of Memphis with two days of songwriting workshops (based on the theme of “home”) and the unveiling of new facilities, equipment and classes.

“Growing up there, it’s one of those towns in America where you feel like maybe people don’t hear you or see you and things don’t get to you”, Timberlake told THR. “It’s a mid-tier town. It’s not New York City and it can be tough there. Having such a connection to music, I had to go outside of my school to (for lack of a better term) feed that beast. Because when I was in third or fourth grade, the music program was cut in my school. Because when the budget gets cut, the arts programs are the first thing that goes. So to be able to go back and see these kids, I felt like, ‘This is me at this age!’ To be able to give them a medium and a place to go to express [their musical talent] and learn more about music means the world to me”.

Adding that he plans to do another season at Stax next year, he said, “I got more than I gave, that’s for sure. They inspired me a ton. We all left that experience going, ‘Wow!’ Everyone who was there, myself included, their lives were altered forever”.

Asked whether he had recovered from having Ukranian prankster Vitalii Sediuk latch onto his leg at the spring 2020 Louis Vuitton show on Oct. 1 during Paris Fashion Week, Timberlake said, “That was nothing! It looked way more than it was. It was kind of this funny thing. I just sort of looked at him. I was like, ‘What are you doing?'” As for the fact that Sediuk pretty much grabs star body parts for a living, Timberlake said with a laugh, “Yeah, that sounds exhausting!”

When it comes to adorable Halloween costumes, the Timberlake family (wife Jessica Biel and their 4-year-old son Silas) have been crushing it. Last year, they dressed as characters from The Lego Batman Movie, while in 2017 they made a splash as Buzz Lightyear, Jessie and Woody from Toy Story. “We win Halloween every year, let’s be honest!” Timberlake said. “I’m starting a film very soon [Fisher Stevens’ Palmer, in which he stars as Eddie Palmer, a man released from prison who returns to his hometown] and so, unfortunately, it’s the first year that we’re going to be away from each other for Halloween”, he shared, otherwise seeming excited at the prospect of his first role since Woody Allen’s 2017 comedy Wonder Wheel. “So yeah, this is the first year that he and mom will be doing Halloween, and I’ll be on location”.

As for who is calling the holiday’s style shots: “My son gets to pick our Halloween costumes every year”, Timberlake said. “He gets to choose, so everything we’ve ever worn is his choice. As the years go by, that may have to be modified, because you never know what a child will choose! He hasn’t chosen yet [this year], so you’ll have to speak to him. But I will say this. If I had to guess, which I’ll probably be way off, he loves Batman. He was Lego Batman last year. So listen, I wouldn’t be surprised if he chose that again!”