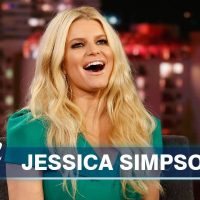 Jessica Simpson kissed a boy and he… immediately texted his old friend just seconds after to tell him.

The singer and actress told Jimmy Kimmel about the time she and Justin Timberlake found themselves sharing a smooch, during a time when they were both single. Instead of losing himself in the moment, Timberlake grabbed his phone to send a text.

“Throughout life, we all found our way back to each other in ways”, Simpson said on Jimmy Kimmel Live about her and some members of The All-New Mickey Mouse Club. “We were in the same circuit. I knew Justin Timberlake very well”.

She added, “After [my] divorce [to Nick Lachey] and he was out of a relationship, he was over at my house and we shared a nostalgic kiss. And I thought, ‘Oh, this is interesting’. And he took his phone out and started typing. And I was like, ‘Ok? I hope that’s not another girl. Did I stick out my tongue out too much?'”

The person on the receiving end of the text was his former Mickey Mouse Club co-star Ryan Gosling.

“Apparently, he and Ryan Gosling had a bet on who would kiss me first when they were 12-years-old”, she explained. “And so, he text Ryan that he had won the bet. I was like, ‘Oh? Ok. Umn, so we don’t kiss again?’ That’s done’.”

Simpson admits she has no idea how much the boys made the bet for all the years ago, and also that it was Gosling who she had a crush on when she was just 12-years-old.