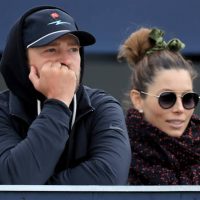 In December, Justin Timberlake claimed he had a little too much to drink when he held hands with his costar Alisha Wainwright while they were out in New Orleans. The incident generated more news and sharp critiques of Justin than that tree album, and it looks like he’s still skating on thin ice with Jessica Biel, who apparently “still has her suspicions”.

According to a new Us Weekly report, Jessica and Justin have their good days and bad days, as many couples do, and they are going to therapy to try to work on their relationship. The source said, “Sometimes they’ll have a great day together, and other days they argue”. The insider also explained that Justin knows exactly what to say to make Jessica feel better about the whole situation. They added, “Justin knows exactly what Jessica wants to hear to relieve any stress. They believe it’s constructive for their relationship…he is trying his hardest to prove himself”.

As for what moves Justin is making to fix this, may I direct your eyes to his comments on her Instagram page. When Jessica posted a video of her sitting on an exercise ball, Justin dropped some red heart emojis with the heart-eyes emoji in the middle. If that didn’t work, surely his “squad!” comment on another one of her videos would, right? Well, Jessica didn’t respond to any of his comments, which could mean a whole lot of nothing…but also, it’s not a great look for him, TBH.