The surprising music and design that inspired ‘Trolls World Tour’ 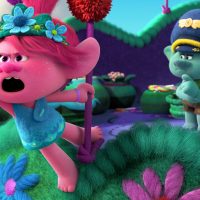 It’s a jukebox of cute.

The new animated film “Trolls World Tour”, out Friday on Amazon and iTunes, sees those lovable singing trolls, Poppy (voiced by Anna Kendrick) and Branch (Justin Timberlake), venture to six music-driven lands — Techno, Funk, Rock, Classical, Country and Pop (their hometown) — to try to stop Queen Barb (Rachel Bloom) of the land of Rock from taking over the world .

“We couldn’t have too many”, says director Walt Dohrn of his musical menagerie. “But we wanted as much diversity as possible”.

The Look: The one returning environment from the first film is the land of the Pop trolls, ruled over by Queen Poppy. “There is a spirit to it that pop music has”, says Dohrn of the design. “Effervescence, glitter, showiness and positivity”. You might even think you’ve clicked over to VH1. “Pop has a lot of locked-down cameras to make it look like a pop music video”, Dohrn adds.

The Sound: “Pop spans many decades”, says Shay. “We have ‘Good Times’ [by Chic] from the ’70s, then ‘Girls Just Wanna Have Fun’ [by Cyndi Lauper] from the ’80s, which is now ‘Trolls Just Wanna Have Fun’. Then you’ve got some ’90s pop classics like ‘Good Vibrations’ by Marky Mark and the Funky Bunch, and then ‘Gangnam Style’ by PSY entering the current century. We wanted to connect with people of all ages, and so that’s why our pop music spans the decades”.

The Look: What’s a troll doll without its big, iconic hair? For the leader of the Country trolls, Delta Dawn (Kelly Clarkson), the filmmakers borrowed the down-home ‘do from the singer of “Jolene”. “We all love Dolly Parton”, says Dohrn. “And when you think of a troll, you think hair. We immediately thought of her”.

The Sound: The Country world features two original songs co-written by executive music producer Justin Timberlake and his “Say Something” collaborator Chris Stapleton. “The Kelly Clarkson solo song, ‘Born to Die’, is supposed to be the antithesis of pop music … real and heartbreaking”, says Shay. Meanwhile, the other original country tune, “Leaving Lonesome Flats”, sung by Dierks Bentley, has what Shay describes as a ” ’70s ‘BJ and the Bear’ vibe’. “

The Look: Unlike many CGI-animated films, the aim of “Trolls World Tour” is to appear homemade, with tactile textures such as felt, yarn and fabric. For the land of Rock, that means “leather and denim and zippers and studs”, Dohrn says. And for its vicious queen, Barb, the team was inspired by the garb of ’80s punk star Wendy O. Williams.

The Sound: “We kind of kept to classics of rock music”, says Shay. “We have ‘Rock You Like a Hurricane’ by the Scorpions, ‘Crazy Train’ by Ozzy [Osbourne, who voices King Thrash] and ‘Barracuda’ by Heart”, says Shay. But executive music producer Ludwig Göransson brought in modern-day trio HAIM for an original song called “Rock Rules”. “It’s really fun”, says Shay. “It’s got this ’70s Joan Jett vibe to it”.

The Look: The trippy design of the land of Funk and its citizens’ multi-colored hair was influenced by one of its voice actors: George Clinton. “I grew up listening to Parliament and Funkadelic in the ’70s”, says Dohrn. “And we were inspired by the artwork from the album covers”. Clinton also got to play the part of artistic consultant, approving and opining on his scenes’ vibrant visuals.

The Sound: “We wrote the Funk part of the movie with George Clinton in mind, so it was very important for him to get cast”, says Shay, noting that Clinton’s classic “Atomic Dog” also funks up the film. “George plays the King of Funk, and Mary J. Blige plays the Queen of Funk. And their son, Anderson .Paak, is Prince D, and he’s the Prince of Hip-Hop. So we kind of have a generational thing going on there”.

The Look: Symphonyville, where the Classical trolls live, takes its aesthetic from a Disney animated classic. “It was definitely inspired by ‘Fantasia’, “ Dohrn says of its “cloud hair and pastoral landscapes”. The team also watched more mature films such as “Amadeus” to capture the heyday of Mozart and his ilk.

The Sound: Venezuelan conductor Gustavo Dudamel is Trollzart, the leader of the Classical world, which, Shay explains, “is kind of organized like an orchestra”. Beethoven’s Fifth Symphony is the string-happy centerpiece here, but there is also original music by composer Teddy Shapiro. The result is almost like a music appreciation lesson. “You get an understanding of how many people it takes to create classical music”, says Shay.

The Look: “You have to be really careful, because a bunch of old white guys making a movie, all of a sudden things could become very caricatured”, says Dohrn. He’s talking about the dance-y electronic music festivals he doesn’t personally attend. To lend the Techno land an authentic vibe, they watched videos of the glowstick-filled fests.

The Sound: “Hamilton” original cast member Anthony Ramos — who stars in the upcoming film adaptation of “In the Heights” — rocks the party in the Techno world as King Trollex. “We had a big list of DJs to play the part”, says Shay, “but it just seemed like Anthony was the right person”. Ramos sets off the movie with a Troll-tastic version of Daft Punk’s “One More Time”. “It was an amazing way to open a sequel: ‘one more time’, “ says Shay.