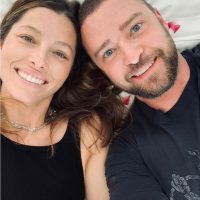 Jessica will get the lion’s share of their assets as well as primary custody of the kids if Justin cheats.

“If Justin was stupid enough to mess up, he’d make sure Jess had everything and more”, spills the pal, “but he says it’ll never come to that”.

Money talks! Since Justin Timberlake and Jessica Biel hit a rough patch last November — the singer, 39, was caught holding hands with his Palmer costar Alisha Wainwright, 31— a pal says he’s agreed to draft a “midterm agreement” to help Jess, 38, feel more secure in their marriage. Justin’s pledged that any proven cheating will result in Jessica getting the lion’s share of their assets as well as primary custody of the kids;’ dishes the friend. “He’s adamant that he never cheated, but this is another good way of reaffirming his commitment toward her”.

The two have patched things up since the scandal, and after reportedly welcoming their second child in July, the pal insists they’re as happy as ever.

“Justin’s 100 percent confident that they’ve come out stronger from the horrible experience he put them through”, the friend adds. “However, Jess is still calling all the shots for now, and Justin’s fine with that He knows how lucky he is that she’s still with him”.

Witnesses said the costars spent about 40 minutes on the balcony drinking before entering the building. They had a very intense conversation and glared at each other’s faces. The “That Girl” singer was not wearing his wedding ring, and witnesses said they probably escaped through the back door. However, Justin insists nothing happened between them that night.

The ‘Filthy’ singer took full responsibility for the incident, saying he had a “strong lapse in judgment”. He said he would not wish to set a bad example for his son.

The couple broke up while dating in 2011 after Justin had similar unconfirmed affairs with celebrities, including Olivia Munn.

Although Justin never engaged in any previous philandering since their wedding, Jess would let him off that easily. She felt Justin needed to do more to prove his commitment to the family. Rumors said the singer was big on promises but failing to stick to them. He also failed to spend more time with the family as Jess expected, and sources said that the actress was tracking his phone.

Conflicting sources said the couple were in a better place after the affair and were working past the incident. Their public appearances shortly after the affair showed Justin giving her attention while Jess appeared upbeat. Justin stroked her shoulders as they were leaning on each other, engaged in deep conversation, and ate from each other plates, according to the source.

Although the current agreement is primarily to ease his wife’s mind, it also helps him to clear his conscience from the guilt originating from the incident. The couple was among the most adored in Hollywood for their strong relationship, and breaking that reputation must be hard for him. His behavior put Jess on the spot, and he felt it was unfair for her to be treated that way.

“He feels guilty and will make it up to her”, an insider told E! after the incident. Perhaps Justin feels he needs to do more to allay his wife’s fears.