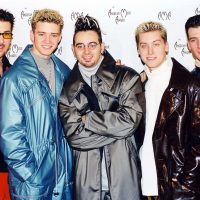 “This I promise you”: You’ve never heard this *NSYNC story before.

During the Sept. 29 episode of Inside of You With Michael Rosenbaum, Lance Bass spilled the tea—or rather the “pop”—on the boy band’s “biggest fight”.

The 41-year-old artist admitted “you couldn’t even call it a real fight”. He said he was in Miami along with Justin Timberlake, Joey Fatone, Chris Kirkpatrick and JC Chasez for the group’s Challenge for the Children charity basketball game. He remembered the singers were tired after being out the night before and were getting ready to do press interviews. The members had all agreed to meet in the hotel room before talking with the media. But according to Bass, Fatone was running about 15 minutes late.

Room service had been sent up, and Fatone had ordered a burger. So, as a joke, Timberlake took a “huge” bite out of it and then put it back.

“Holy moly!” Bass said. “There was something up Joey’s butt that day because when he came in and he saw somebody bit his hamburger, he was like, ‘Not doing it’. And he, like, protested, ‘I’m not leaving here until I get a new burger’. It was so funny. I’ve never seen Joey get so upset about something like that”.

Bass acknowledged Fatone “was probably tired or something” and that he was “just over it in that moment”. However, he said he and his fellow singers still haven’t let Fatone live it down.

“We make fun of him all the time for that outburst”, Bass said. “All the time”.

This wasn’t the only moment to cause a little tension. Bass also noted that Kirkpatrick was the one to “always make my eyes roll” during interviews.

“Because Chris, you know, he’s very animated, and he’s funny and he’s always cracking a joke”, he said. “But when someone is always cracking the joke in every single interview, and you do like 20 a day and there’s five guys, your days get long and long and long. So, there have been many times I’m like, ‘Shut up. Just answer the question so we can move on because we are so tired right now’. So, he would always make all our interviews at least double the time”.

*NSYNC formed in 1995 and went on to release a number of popular songs, including “Bye Bye Bye”, “It’s Gonna Be Me” and “Space Cowboy” just to name a few.

But in 2002, Timberlake left the band and the group went on a “temporary hiatus”.

“Me and the guys were never on bad terms at all”, Bass said. “It’s just, you know, life goes on and you have more interests and you have to focus on your careers and it’s great. The thing I was most disappointed in was not just Justin leaving the band. It’s that our whole team, our record label, our management, everything like that, they all knew. They all knew it was over for three years before they told me. So, for three years, I’m sitting there getting ready for a new album as everyone else knows we’re moving on”.

Bass said he had even turned down other opportunities before the band split, including a sitcom. “There’s all kinds of stuff that I really wanted to do and focus on, but I knew I couldn’t because, you know, my first commitment was *NSYNC”, he said. “Like, this was my life”.

As he continued to put it, “It would have been nice to kind of, you know, set up a little better before going out solo”.

Still, he made it clear there’s no bad blood and that the artists were generally too busy to quarrel.

“With us, and that’s why we’re so close, we’re brothers”, he said at one point. “I mean, we love each other; we hate each other; every single emotion comes out when you’re in a brother relationship…The good thing about us is, if we fight, we make up very quickly. We kind of forget things because I think we’re just guys. But, like, we don’t hold on to things too much”.