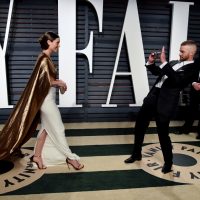 It’s a banner week for delightful celebrity parent couple anniversaries; Justin Timberlake and Jessica Biel are celebrating theirs, just a few days after Dax Shepard and Kristen Bell’s oft-forgotten anniversary. And what do both couples have in common? Aside from talent, money, and great hair… They’re all super honest about parenting in the most heartfelt and often hilarious ways.

Biel and Timberlake, for example, have no qualms about complaining how difficult their son, 5-year-old Silas, can be — whether he’s making messes or forcing them to eat in the shower. But through all the exhaustion and annoyances, they love this little guy endlessly. Celebrity parents: They’re just as tired/overwhelmed/obsessed with their kids as we are! In fact, Biel and Timberlake are so cool and honest, my own son Silas and I may even forgive them for stealing my baby name. Maybe.

Biel and Timberlake celebrate their eighth year of marriage today, and it’s been a doozy for them. In addition to 2020’s general awfulness (you know, global pandemic and widespread racial violence), this year of marriage started rough for the couple when cheating rumors began after Timberlake was photographed holding co-star Alisha Wainwright’s hand. But it turned out nothing was going on, Timberlake gave Biel the public apology she deserved, and the pair were able to put it behind them (quite faster than the tabloids were) and move on.

They’ve moved on so much, in fact, that they reportedly welcomed their second child this summer! The couple has yet to confirm their new addition or release any details — but Timberlake’s erstwhile NSYNC bandmate Lance Bass confirmed the baby’s arrival, so that totally counts, right?

To celebrate this beautiful pair of parents (and wish them many more years of laughs, kid messes, correct body anatomy terms, and maybe a tad less drama than this year), read on for Jessica Biel and Justin Timberlake’s most honest parenting quotes — and see if you can relate.

“We wanted him to be just for us, just for a little while”, Timberlake wrote in his book Hindsight: & All the Things I Can’t See in Front of Me, of his and Biel’s decision to keep Silas out of the public eye. “It was important to us to choose how to share him with the world because this is a whole new era for me… It’s no longer just about me. I have a wife, a child — a family. It’s terrifying. It’s invigorating. It’s more meaningful than anything I’ve ever been a part of”.

The sleep deprivation is real

“God forbid they wake up in the middle of the night”, Biel told Stephen Colbert on his show in 2017 of Silas’ descent into the terrible “threenager” phase. “You know, if you wake my kid up in the middle of the night by accident, you’re dead to me… I’ve heard so much about the ‘three-teens’. The 3-year-olds are called the ‘three-teens’ because they’re so insane that they’re just like having tiny teenagers, which is way worse than having big teenagers, I think”.

Of course, then she backpedaled like so many of us parents have: “I mean, listen. It’s not all terrible, by the way. He’s like the greatest of all time. Now, I’m feeling really bad. He’s cute. He’s funny”.

“We’re using technical terms”, Biel said at the 2018 Makers Conference in Los Angeles about starting Silas’ sexual anatomy education early. “We shower together and [we say] ‘This is what I’ve got. This is what you’ve got’. I know it’s really young, but I really believe that if you start this early, there’s no shame”.

Kids teach us more than we know

“Boys grow up to be fathers”, Timberlake wrote on his Instagram on Father’s Day this year. “I think about that a lot these days. We try to teach our son to love and to respect everyone — we teach him that all people are all created equal, and that no one should be treated differently because of the color of their skin. We teach him this because one day, he will go on to teach his kids the same. It’s a cycle. And right now, as we all work to undo generations of discrimination that have plagued our system and our communities across this country… I’m reminded today that the first lessons start at home. Im grateful for both of my dads and my mother for teaching me those lessons from the beginning. And for listening to me when I had something to say that they hadn’t learned. I pray for that humility with my own son. I’m grateful for my wife, who made me a father, and is my favorite person/partner/teacher/friend in all of it. I’m grateful for my son, who is always ALWAYS teaching me right back”.

“We’re mostly commiserating over the fact that 24-hour parenting is just not human”, Timberlake told Stanley T on SiriusXM’s The Morning Mash Up in April 2020. “My son looks at me like this and I’m like ‘Alright, cool let’s take a 20-minute [break]. I got you. Just a commercial break'”.

You may never eat a real meal again…

“That is what happens when you are a mom or a dad. You make food, they eat what they eat, and you literally ― as they are running off trying to grab something ― you are shoveling the last few bites off of their plate”, Biel told People of her, um, meal plan as a mom. “And that is your lunch … that is your lunch”.

…or, you just end up eating in the shower

“This is just mom life”, Biel told Jimmy Fallon after she posted on Instaram about eating in the shower. “I don’t know if anybody else does this. I do not have time for anything. I’m feeding him in the morning, trying to get ready and I realize I haven’t eaten. I just take it into the shower”. No judgment here.

The cluelessness of it all

“You literally just wake up, look in the mirror and go… ‘I have no idea what I’m doing!'” Timberlake told TODAY in 2016 about what parenting baby Silas was like.

How selfish we once were

“You think you’re a selfless person, and then you realize you’re not”, Biel told Marie Claire in 2017 of her dive into parenthood. “These little people come around, and they require so much, and your schedule is really not your own, nor is it important anymore, and it’s very clear that it’s your life now revolving around this dude”.

Parenting is the trippiest trip

“The last 3 years of my life have brought more joy than I could ever imagine”, Timberlake wrote on his Instagram on Father’s Day 2018. “Being a father is such a trip… an amazing discovery every day. My son: it is my honor to be your Daddy. You make me feel a love that I didn’t know existed. I will ALWAYS be there… to pick you up when you fall, to lift you up when you are ready to soar, and to remind you that your humility will be your guide through this thing called life. And to all the Dads out there: Keep on keeping on! Our children are watching and listening more than we know!”