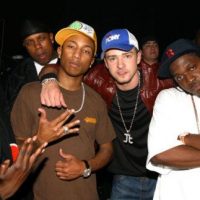 Pharrell Williams has claimed that “all but one” of the tracks on Justin Timberlake’s debut album, ‘Justified’, were originally written for Michael Jackson.

Speaking on Revolt TV podcast Drink Champs, Pharrell revealed that he was regularly sending beats to both Jackson and Prince, apparently without success.

“John McClain was his manager at the time”, the Neptunes producer explained. “We sent him pretty much all the stuff y’all are hearing on the ‘Justified’ album. That’s all the Michael stuff”. According to Pharrell, almost every song on Timberlake’s 2002 debut was put together with Jackson in mind. “All but one song, they were all written for Michael”, he said.

The producer claimed Jackson wasn’t interested in the tracks on offer, suggesting that he wanted something closer in style to Pharrell’s 1998 N.O.R.E. collaboration. “John McClain was like, ‘Man, Michael don’t want that shit'”, the ‘Entrepeneur’ singer told the host. “‘He want that shit you’re giving Noreaga… he want that ‘Superthug'”.