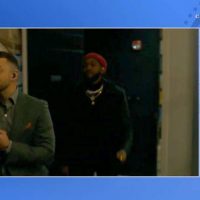 During one of the most challenging years in recent times, singer/songwriter Ant Clemons turned his dreams into reality. Clemons has been making music since he was a kid growing up in New Jersey. And as recently as a few years ago, was working at Red Lobster to pay the bills while working on his music.

And in what can only be described as the living American Dream, tonight, he’ll take the national stage performing alongside Justin Timberlake during the “Celebrating America Primetime Special”. So how did he get here?

After moving to Los Angeles in early 2018, he began by writing a song a day in exchange for a floor to sleep on. By June, he landed himself a feature as the iconic voice behind Kanye West’s hit single, “All Mine” from ye and found himself atop the Billboard charts. This relationship with West led to further collaboration on Jesus Is King where he landed features on “Water” and “Everything We Need” and performed alongside the rapper during his 2019 headlining Coachella performance.

He quickly made connections in the music industry as word spread about his talents. And within just a few short years, he was nominated for Best R&B Album for his debut EP, Happy 2 Be Here. The album dives into the personal struggles that come with the pursuit of greatness. In his lyrics, he recounts dream chasing and sleeping on park benches.

Along the way he connected with Justin Timberlake who wanted to collaborate on a song that would bring healing during a very difficult year.

“We wanted to be a glimmer of hope. And show someone this is the perspective you can take and miss the storm”, Clemons says.

Their song is called “Better Days” and aims to remind the world that despite life’s obstacles, “there is light at the end of the tunnel”. Clemons and Timberlake collaborated on “Better Days” over many months until it all came together at just the right time.

They debuted the song during Stacey Abrams’ Rock the RunOff virtual concert. That’s when the Biden/Harris Inauguration team saw it and thought it would be a perfect fit for the Inauguration special. And it just so happens, performing at the Inauguration was a dream the two artists both manifested.

“In the midst of working on this song, we were like wouldn’t it be cool if we performed this during the Inauguration. And Justin said, from your mouth to God’s ears”, Clemons says. “Then he called me and was like, I just got a call asking us to be a part of the Inauguration and I’m like wow, God is the greatest!”

Clemons says Timberlake has been a mentor to him during their collaborative process. And that’s something he hopes to pay forward during his “Better Days” ahead. The “Celebrating America” special will be hosted by Tom Hanks and airs 8:30-10:00 p/m. ET/PT  on NBC, and every major network.