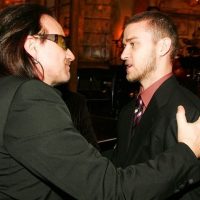 The actress, 29, confessed she repeatedly called the American singer before asking him trivia on the back of a cereal box when she was a teenager.

Eve has previously admitted she was a ‘little troublemaker’ during her youth with her U2 star dad refusing to hire a ‘good-looking support’ band in her teens due to her wild ways.

Speaking on Thursday’s This Morning, Eve admitted she loved to play pranks with her siblings while they grew up together in Dublin.

She explained: ‘I like to take advantage of my circumstances sometimes, and when I was younger I stole my dad’s address book, I tried to prank call a few people, but Justin picked up, so we asked him trivial questions from the back of a cereal box.

‘He did well and I think that’s why he didn’t hang up, I don’t know what his need to win is he must be a very competitive person’.