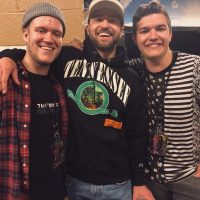 Many people don’t know that Justin Timberlake has siblings. Well, technically they’re half siblings, but they still count. Timberlake’s parents, Lynn and Charles (Randy), got divorced when he was in kindergarten and shortly after, they both got remarried, resulting in more siblings for the singer.

His half-siblings are much younger than him, born during his *NSYNC days and tend to keep out of the spotlight. He has two half-brothers, Jonathan and Stephen, who are both from his father’s second marriage to Lisa Perry. He also had a half-sister, Laura who died shortly after childbirth. Lynn got remarried to a financial analyst with the last name Harless. They never had any children.

Not too many people know whether the singer/actor is close to his half-siblings or that he even has any at all, because he doesn’t talk about them.

Justin was 16 when his sister died shortly after childbirth. It was a really hard time for him, and he wanted to honor her in some way. So, in the cover booklet of *NSYNC’s debut album, in his “thank yous”, Justin wrote, “My angel in heaven, my sister Laura Katherine”. This shocked many people because they didn’t even know he had a sister. It was the last dedication in the booklet.

9 Many People Thought She Was His Twin

Because no one knew about it, many people assumed Justin had a twin who died in childbirth. But after doing some research online, you can see that she was born on May 12, 1997, and passed away the same day, so she was not a twin, but a younger half-sister of Timberlake. She would have been a daughter of Timberlake’s father. Cause of death is not publicly known.

8 Jonathan Is A Music Producer

When you have a brother who is one of the most popular singers in the world, you can’t help but fall into music too. Jonathan made a music project named LIV, in 2015, when he met a singer named Liv Miraldi in his music history class during his sophomore year of college. Since then he has produced other projects and started getting back into music in 2020. He doesn’t appear to be a singer though.

Jonathan’s middle name is Perry, which is his mother’s maiden name. Lisa Perry is Justin’s stepmother. In a way, this is similar to Justin’s middle name. Justin shares his middle name with his father, Charles Randall, who is called Randy. Justin also gave his oldest son Silas, the same middle name. Maybe Jonathan will keep up the tradition of sharing middle names, if he decides to have children.

6 Stephen Is Living A Normal Life

Stephen is 22-years-old and a student at Lipscomb University. He lives with his girlfriend Brook and their two dogs, Monty and Beale. Not much is known about him, but his Instagram is filled with dogs, his girlfriend, his friends, and fighting for equality. Occasionally, he will post a picture of Justin. Stephen seems to be happy, living a normal life.

4 Justin Biel Is A Writer

Aside from running a successful fashion business, Justin Biel is also a freelance journalist and copywriter. Even though he hasn’t contributed lately, Biel is the trends editor at Grow Wire, where he writes about marketing, entrepreneurship, and more. He even has an online portfolio for all of his work. Justin may write a script of two, but leaves all of the acting up to his sister.

3 Timberlake Has Many Unbiological Brothers

While he does have half-siblings and a brother-in-law, Justin also considers other people in his life to be his brothers. First, his former band, *NSYNC, were his first brothers- Lance Bass, Joey Fatone, Chris Kirkpatrick, and JC Chasez. They even have a group chat, just like any family. His other brother, or bromance really, is with The Tonight Show host, Jimmy Fallon. They go “bro-biking” together and hang out all the time.

2 Stephen Also Made A Song

Back in 2017, Stephen released a song called “The Death of You (And Me)”. Justin’s brother is clearly following in his musical footsteps. He has also released two other songs, which are all available to stream on Soundcloud. To a trained ear and Justin fan, you might think it was him in the beginning. He even uses one of Justin’s lyrics, “You cheated girl. My heart beated girl”.

1 They See Justin From Time To Time

Jonathan and Stephen showed up to a Man of the Woods Tour show, but they don’t just support his career. Jonathan posted a photo a few months ago of him and Justin laughing. The post was for Justin’s 40th birthday. The resemblance in the picture is almost uncanny. You can definitely tell they are related. It is nice to know the brothers get along and hopefully are a part of Justin’s sons’ lives.