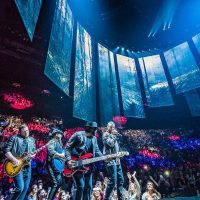 Pianist BLKBOK helped Justin Timberlake tour for the first time outside of N’Sync and knew exactly what to do to get the best out of Rihanna.

In this installment of “Tour Tales”, BLKBOK discusses building creative chemistry with Rihanna, impressing Justin Timberlake, and bringing his lessons from to his upcoming live shows in support of his debut album, Black Book.

What was your first major tour?

The first major tour I was on was the “Justified Tour”, Justin Timberlake’s first solo tour. That was my first time out on the road. It was a natural transition. Early on in my childhood, I had come from classical music, then did jazz in high school and college, and then I played with a Blues band. I had all of these genres of music I had been through. So, when I got the call to do Justin, it was easy. It was just going to do the next thing.

Artists like to perform songs differently than how they’re recorded. What changes did you make with Justin’s Justified album for the tour?

I know musicians say we need to jazz it up, but there are also instances when you do not jazz it up. I don’t know if they have spoken to that yet. If you’re doing live TV, you play it how it is on the record. That’s one instance. But, on the regular shows, we kept it true to what it was because it was his first solo album. You didn’t want to take their ears too far from what they’re used to hearing.

How would a typical show go on that tour?

He’s such a dancer, keyboard player, and guitarist, it was one of those things where we were creating a show that gives him the attention that’s needed. One of the things I pride myself on as a past touring musician is to be the best compliment I can be. I never step on their feet, I just support whatever message the artist is trying to get across.

What was the most memorable part of The Justified Tour?

There was a moment when the musical director, Kevin Antunes, couldn’t make the show that night because I think one of his kids got sick and was in the hospital. I had to go in and learn the parts that he was playing and my parts. I had to transition from my space where I was playing to run over and play his parts. Then, I’d run back and play my parts. I went back and forth all night long. When I got done with the show, Justin came up to me and was like, “I don’t know what the hell that was, but you are a hero. I’ve never seen anything like that in my entire life”. I told him, “J, it’s my job to make sure this show goes on as normal. Whatever that takes is what I’ll do”.

What are the tour hits for Justified?

For that tour, there was a song called “Right For Me” that had choreography and was done in a certain way that was really cool.

You went with Justin on the “Future Sex/LoveShow Tour” after that. What was the biggest difference between those two tours?

The biggest difference was the production itself. In the production for FutureSex/LoveSounds, we were in The Round, which was different. We had a four-channel sound, which meant speakers playing in four different directions and had different things in them. So, it was a bit more complex. There were bars on stage where people would sit and order drinks. The stage moved in different directions. It was a completely different beast. One of the things I really admired is how Justin handled the production and how meticulous he was about every little aspect. That’s definitely something I take into what I do now.

Were there any songs you updated or remixed for those shows?

“Until The End of Time”. We did some things with that one. It’s a very simple song. It’s literally four chords, but we took it and expanded upon that idea. I was playing a lot of inflections, and runs that would transition and tie things together. We kinda went crazy with that song and people loved it.

We went to an indoor snowboarding place in Leeds, U.K. I had never snowboarded before, it was my first time, and Justin was my coach. I and another dancer were super young and crazy, so we took the lesson and Justin was like, “Yeah, we’re going to the top”. We were like, “Yeah? We’re going too”. I literally tumbled down an entire hill. It was terrible.

What was the most memorable show on FutureSex/LoveShow Tour?

The HBO special. That was the first HBO concert special. Just being a part of that was a really epic moment. The way it was shot and done was incredible. The interviews done pre-show were done great and it’ll always live with me.