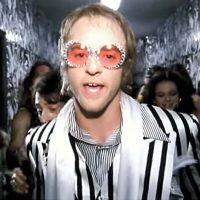 Taron Egerton may have drawn raves in Cannes for his portrayal of Elton John in Rocketman, but he wasn’t the initial actor envisioned by the legend.

In fact, the first person Sir Elton thought of to portray him was none other than Justin Timberlake. So, where did John come up with that idea? The former boybander-turned-hitmaker/sometime actor starred in the David LaChapelle-helmed video of John’s 2001 song This Train Don’t Stop There Anymore.

“But we never formerly approached Justin because we weren’t ever at a stage where it was the right time to approach him”, John’s husband and Rocketman producer David Furnish tells THR. “But he did an amazing job in the video. He put on a prosthetic nose, and it turned out to have been some really interesting acting work as well”.

As for the other almost-Rocketman, Tom Hardy, John appeared to throw a little shade on the Venom star.

“Taron Egerton can onboard this film because somebody else dropped out”, he told the crowd at the film’s Cannes afterparty. Not that he was complaining. He quickly added, “His performance in this film is scary brilliant. … When I watch the movie, I don’t see an actor, I see myself”.