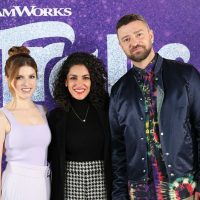 Trolls World Tour voice stars Justin Timberlake and Anna Kendrick were reportedly kept out of the loop about the film skipping its traditional theatrical window and heading straight to on demand. According to The Hollywood Reporter, Timberlake and Kendrick were not informed about the move before it was announced on March 16, and as such, they are now asking to be compensated for their would-be box office bonuses.

THR’s Kim Masters reports that as Trolls World Tour continues to break digital on demand records — Universal claims that the animated film had the biggest-ever digital debut — the film’s voice stars are eager to receive their backend salaries. Sources close to Timberlake and Kendrick say that the stars were not informed that the film would forgo its theatrical release, a decision that has caused them to lose out on a potential payday. Because “compensation for big stars in animated films is largely tied to box office bonuses”, Masters reports, the actors’ representatives are now seeking “seven figures” from the studio.

Masters’ report also questions the veracity of Universal’s claim that Trolls World Tour took in $95 million in domestic rental fees in its first three weeks on digital. According to The Wall Street Journal, the $90 million Trolls sequel made almost $77 million in revenue — Universal got to keep about 80% of the total $95 million — from an estimated 5 million customers, a figure that puts it well above its 2016 predecessor ($153.7 million domestically, on a roughly $125 million budget).

However, THR reports that Trolls World Tour is “still millions in the red”, and some industry insiders believe that it will never be profitable. While the first Trolls saw a strong showing at the international box office, bringing in $346.9 million worldwide, Universal’s straight-to-VOD move has reduced the sequel’s chances overseas, where on-demand viewership is less popular. “They probably overhyped it”, analyst Hal Vogel tells THR. “But like most people in the business, they haven’t had a lot of success in the past two or three months, so any ray of sunshine helps”.