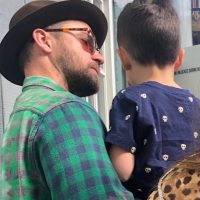 “That’s a good question”, the Out of Sync author, 41, told Entertainment Tonight’s Katie Krause on Friday, September 25. “Justin would kill me”.

The Mississippi native went on to say that the ‘NSYNC group chat is now all about their families. Bass has even seen pictures of the couple’s second child, saying, “The baby is cute, of course. It’s Justin and Jessica!”

Amid speculation in July that Timberlake, 39, and Biel, 38, had expanded their family, Brian McKnight told Hollywood Life that they “had a new baby”.

The couple are also the parents of son Silas, 5. In 2018, the Grammy winner said he and the actress planned to have “as many kids” as possible.

“I’ve never felt more inept in my life”, he joked with Beats 1 of parenthood at the time. “You wake up and all of a sudden there’s this human being you’re responsible for. … I feel like the success of parenthood is feeling like I failed all day today, but I get to wake up tomorrow and do it again … and hopefully they turn out to be a good human being”.

Silas’ parents tied the knot in October 2012 in Italy. Timberlake made headlines in November 2019 after he was photographed holding hands with his Palmer costar Alisha Wainwright at a bar in New Orleans.

A source exclusively told Us Weekly the following month that the “Cry Me a River” singer was “making a big effort” to help his wife feel special after the incident.

“He has been so sweet to her and is making sure that Jessica knows how much she means to him”, the insider added in December 2019.

Timberlake apologized in a lengthy Instagram post at the time. “I displayed a strong lapse in judgement — but let me be clear — nothing happened between me and my costar”, the Tennessee native wrote. “I drank way too much that night and I regret my behavior”.

Another source exclusively told Us in February 2020 that the couple had “agreed not to fight or argue” in front of Silas, explaining, “Justin and Jessica have so much fun at home with him. It’s very cute to see”.