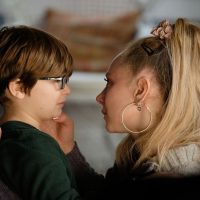 Before the first lockdown hit, Temple shot the film “Palmer”, opposite Justin Timberlake, in Louisiana. It’s a small-town America story from Oscar-winning director Fisher Stevens, about ex-convict Palmer (Timberlake), who forms an unlikely bond with a seven-year-old-boy, Sam, as his mum struggles against addiction.

The actress agrees that eight-year-old child actor Ryder Allen steals the film and is the heart of it, gifting her some powerful scenes as drug-addicted mother Shelly.

She describes Timberlake as “brilliant” and says Allen, like her Ted Lasso character, was “an injection of joy”.

She continues: “He’s got such a huge open heart and such a curiosity and such a beautiful way of looking at life that is so apparent on film too.

“I know he’s going to have quite the career, that young man”.