The happiest place on Earth! Justin Timberlake showed off his love of Star Wars during a visit to Disney World with his and Jessica Biel‘s son Silas.

The singer, 40, posted rare photos of the couple’s eldest child via Instagram on Saturday, May 15. “I don’t know who was freaking out more… me or my six year old”, he wrote. “This was the coolest. Big thank you to @waltdisneyworld for an amazing trip”.

Instagram: Big thank you to @waltdisneyworld for an amazing trip +4 images 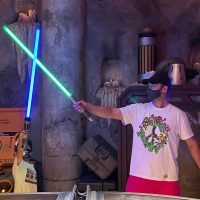 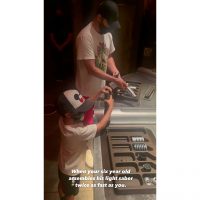 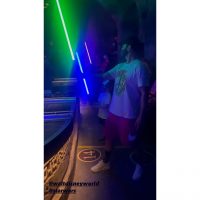 In the accompanying video and pics, Timberlake and Silas played with lightsabers in the Star Wars: Galaxy’s Edge section of the theme park, which is located within Hollywood Studios. The father-son duo fist-bumped and held hands while covering their faces with masks amid the coronavirus pandemic.

The Grammy winner shared more sweet moments from their vacation via his Instagram Story on Saturday. “When your six year old assembles his light saber twice as fast as you”, he captioned a video of the pair.

The actress joked earlier this month about Silas’ lack of interest in the former ‘NSync member’s career, although she noted that their son is a big fan of his character from the Trolls franchise. “Silas does definitely [freak out] with Justin because of Branch”, she explained during a May 7 appearance on The Tonight Show Starring Jimmy Fallon. “[But] whenever he hears Daddy’s songs, he’ll go, ‘Oh yeah, that’s Dad. No big deal, whatever'”.

The 7th Heaven alum gushed over her sons’ bond as well, referring to them as “besties”.

“I really was worried”, she confessed. “You just never know what’s going to happen and how your older one is going to feel about the little one. They just think each other are so funny, and it’s so amazing to watch”.

Timberlake, for his part, quipped on The Ellen DeGeneres Show in January that he and Biel “don’t see each other anymore” now that they are the parents of two children.

The All-New Mickey Mouse Club alum and Silas shared a fist bump as their lightsabers illuminated. The pair held hands as they entered a Star Wars attraction.

Timberlake and Silas wore matching outfits for their day at the theme park. The “Can’t Stop the Feeling!” crooner struggled to construct his lightsaber, while Silas had no trouble with the task.

Timberlake and his son raised their lightsabers alongside other park-goers.