This week, Justin Timberlake was back in Memphis — at least via computer — as he video conferenced into a workshop with students of the Stax Music Academy.

Timberlake and a team of his associated producers, musicians and industry figures helped guide a two-month creative class and mentorship program, called the “All Star Song Lab”. Eight Stax Music Academy students, working as teams, were invited to take part in the program. 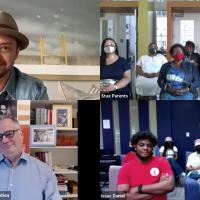 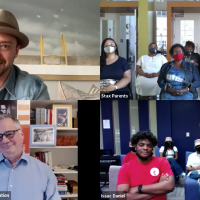 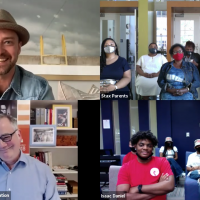 On Thursday evening, the Memphis-born pop star celebrated the completion of the “All Star Song Lab” with the students and their parents during an event in which the songs they wrote and recorded as part of the program were played.

Although Timberlake had conducted a similar workshop in 2019 in person at the academy, the pandemic forced this year’s more expansive effort to take place virtually.

Justin Timberlake, top left, appears during a video event with students of the Stax Music Academy and their families on June 17, 2021.

“The fact we were able to do this, to work together on Zoom or on your laptops… just how far tech has come for us to be able to make this music is mind-blowing”, Timberlake noted at the start of Thursday’s final session.

The “All Star Song Lab” effort, which began this spring, saw Timberlake further grow his already deep relationship with the Stax Music Academy.

Two summers ago, as part of a Levi’s funded initiative, the company and Timberlake installed a creative space called “The Song Lab” in the academy building in South Memphis. That August, Timberlake surprised students with a two-day workshop that also featured noted producers Timbaland and Rob Knox and Memphis guitarist Elliot Ives. Timberlake also pledged to contribute $100,000 toward a scholarship fund for SMA students.

According to the Stax Music Academy, students were selected based on their interest and participation in previous programs. They were paired up as a duo to work on a song together with guidance from Timberlake and Grammy-winning producer Nate “Danja” Hills.

The program also included guest lectures and Q&A sessions focused on the business of songwriting, publishing and distribution. Walter Jones, Ari Gelaw and members of the Universal Music Publishing Group, along with J.R. Mckee from Venice Distribution, were among those who spoke with the students.

The four teams’ songs — Kierstyn Pryor and Jaylon Toler (“Memories”), Violette Worley and Xavier Henry (“Deception”), Morgan Cannon and Levi Bennett (“Save My Love”), Shaylon Venny and Kylan Ayers (“If You Know”) — were written, recorded and mixed over the course on the sessions.

The finished work was played for Timberlake during Thursday’s video event, and the singer was enthusiastic about the completed results.

“Just seeing what you guys started with, the kernels of these amazing ideas and how you were able to really bring it home”, Timberlake said, “[I’m] just so proud of you”.

Ultimately, the students will have their tracks mastered and released on digital and physical formats this year.

The 2021 “All Star Song Lab” program — which Timberlake funded, and which was produced by creative agency Imprint Projects — was designed to build on the success of those initial efforts. According to a statement, the goal was “to work with students specifically interested in songwriting and production and offer mentorship from Justin as well as his music collaborators in the industry”.

Timberlake added that he “selfishly wished I could be there in person with you, and anticipated it being challenging for us to do it [over Zoom]. But credit to you guys being so open to all these ideas and to your mentors there for making it such a great seamless process”.

“In some ways [doing it via zoom] allowed me to sit and just zone in on the music and the way it sounded and offer up some perspective that I wouldn’t have if we did it the same way we did the first time”, he said. “I really learned so much from all of you”.

Timberlake concluded the event, by adding — in fact, guaranteeing — that the next mentoring sessions would take place in-person. “No more screens”, he promised, “only real face time”.

“Traditionally, we always talk about ‘here’s a verse and here’s a chorus and here’s a bridge’. But essentially, they all should be hooks”.

Teen students from the Stax Music Academy are getting pointers from a talented and successful Memphis-connected musician.

That’s standard operating procedure for the program, which draws from the city’s musical past and present to prepare its future.

But getting pointers from a hometown-bred superstar who’s moved more than 30 million albums?

But it also wasn’t a first for these eight students, who presented four songs — composed and produced in pairs — to Justin Timberlake on Thursday night during a culminating event of Stax’s first “All Star Song Lab”.

The physical lab is a remodeled and fully equipped space at the academy, donated by Timberlake and the Levi’s Music Project.

The “All Star Songwriting Lab” was a nine-week course — held via Zoom during COVID — that allowed eight students selected by Stax leadership to work on writing and producing songs with guidance from Timberlake and Grammy-winning producer Nate “Danja” Hill.

In the concluding event Thursday night, the four student duos presented their final work from the Song Lab alongside their in-house Stax mentors, Isaac Daniel (the academy’s production director) and Ryan Peel (songwriting and music business instructor). Parents watched along on Zoom from a different room at the academy and Timberlake joined in from his Middle Tennessee home.

“You two know that I’ve always loved this song. It’s awesome. Are you happy with it?”, Timberlake asked students Violette Worley and Xavier Henry about their song “Deception”, which led the presentation.

“Starting this song with that chord progression and where you were coming from with the inspirations you had, I told you you guys were the most ambitious, right?” Timberlake said to students Morgan Cannon and Levi Bennett about their collaboration “Save My Love”.

“But I also told you that was going to be an obstacle. That breakdown bridge? It really tied it all together. Man, I’m so proud of you guys. You really brought it all home”.

“The melodies are so great, the hook is so catchy. I think I told you this before, but the one note you bent on the bridge? I love that”.

Timberlake was effusive about each of the four student songs, but seemed particularly impressed with “If You Know”, from Shaylon Venney and Kylan Ayers, smiling and shaking his head in surprise as he listened along.

“You guys crushed this one. Every moment is exciting”, he told them. “I could hear that song on the radio right now”.

A native of Millington, on the north end of the Memphis metro area, Timberlake has had many Memphis connections over the years as he rose to stardom, first out of the Orlando, Florida, teen pop scene and then into an adult pop/R&B star. From acting in Memphis filmmaker Craig Brewer’s “Black Snake Moan” to developing local hip-hop band Free Sol to his past ownership of the golf course Mirimichi to doing tour prep across the border at North Mississippi’s Landers Center.

Timberlake’s working relationship with the Stax Music Academy began in 2019, when he and superstar producer Timbaland came to town for an in-person two-day songwriting workshop with students, out of which grew this “Song Lab” project.

The intersection of Timberlake and Stax has gone national a couple of times recently.

In December 2019, Timberlake and television host Ellen DeGeneres announced a $250,000 gift to the academy on the Christmas special “Ellen’s Greatest Night of Giveaways”.

And earlier this year, a pre-taped performance of Timberlake and Stax students from inside the Stax Museum of American Soul Music and from McLemore Avenue just outside the museum doors, was part of the nationally televised “Celebrating America” broadcast after the Presidential inauguration.

For the students, the presentation to Timberlake was the grand finale of a full day, which included tours to the Memphis Record Pressing plant and to various music facilities at Crosstown Concourse, including the new Memphis Listening Lab and WYXR radio.

This inspired an interesting trip down memory lane from Timberlake.

“I had no idea that I was making music and signed to a label that was all the way in New York and then they were making my vinyls in Memphis”, Timberlake said.

“For years I had no idea. Then finally, it came through on a test copy of ‘The 20/20 Experience’, so like eight years ago. It said ‘Memphis Pressing’. I thought they’d just taken the name as an homage to the city, but no, it was done there. That blew my mind. I’m glad you got to see that”.

The hope is that the “All Star Song Lab” project will be recurring, and maybe not fully virtual in the future.

“I wish I could be there in person with you”, Timberlake told the students at the end of the presentation. “Even having just a Zoom meeting with someone from a studio is awkward, so I anticipated this being challenging for us. Credit to you guys being so open to this, and to your mentors (in Memphis). In some ways, it gave us an opportunity to just zone in on the music and how it sounded. But hopefully next time around we can do this in person”.

Then he thought about it.

“We will do it in person next time. Let’s just put that in the air”.