Justin Timberlake Wraps Man Of the Woods Tour With Global Gross Of $226.3 Million 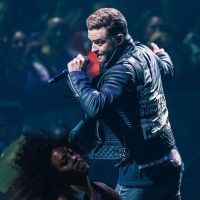 Exactly 13 months after debuting The Man of the Woods Tour at Toronto’s Air Canada Centre, Justin Timberlake closed his fourth solo headline trek on April 13 at Mohegan Sun Arena in Uncasville, Conn. After the final of 115 shows played, the tour’s final earnings amount to $226.3 million from 1,759,812 tickets sold, according to figures reported to Billboard Boxscore.

Timberlake played the tour’s first 36 dates in North America, pulling in $83.9 million between March 13 and June 2. He spent last summer in Europe, grossing $40.7 million from 27 performances. The self-proclaimed Man of the Woods then returned stateside to play an additional 52 shows in North America, split between two legs due to vocal cord issues, where he grossed an additional $101.7 million.

Early in the tour, Timberlake notched his highest gross at Chicago’s United Center on March 27-28, 2018. His two-night engagement grossed $5.3 million, becoming the highest-grossing North American engagement of his career. While this high-mark is followed by domestic double-headers at T-Mobile Center in Las Vegas ($5.1 million; April 14-15, 2018), and The Forum in Inglewood, Calif. ($4.9 million; April 28-29, 2018), the tour’s top engagements by paid attendance lean toward the European leg. Timberlake moved 35,322 tickets over two nights at London’s O2 Arena, 34,819 tickets in two nights at Sportpaleis in Antwerp, Belgium, and 34,497 tickets from just one show at the GelreDome in Arnhem, Netherlands. His U.S. dates reached a top tier ticket price ranging from $225 to $280, while the European shows never extended past $174.50 USD per ticket.

The Man of the Woods Tour supported Timberlake’s 2018 album of the same name. Man of the Woods debuted atop the Billboard 200 chart dated Feb. 17, 2018, becoming his fourth No. 1 title on the all-genre ranking.

Nearly 16 years off from his first solo headline show, Timberlake has grossed $636.3 million, combining his $586.3 million as a solo headliner with his portion of co-headline tours with Christina Aguilera (Justified and Stripped Tour; 2003) and Jay-Z (Legends of the Summer Stadium Tour; 2013).