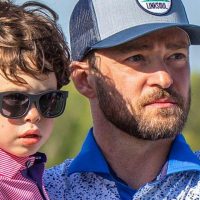 Justin Timberlake was a man of the green this weekend. The superstar joined a crop of celebrities participating in the PGA Tour Champions Bass Pro Legends of Golf tournament at Big Cedar Lodge in Ridgedale, Missouri on Saturday, April 27. It was a family affair as the 38-year-old showman played in the “Show Me State”. He had the support of his A-lister wife Jessica Biel, 37, and their four-year-old son Silas, who sweetly cheered in the crowd. The PGA Tour captured their heartwarming rallies, in addition to extra aww-worthy father-son moments.

In a Justin-centered video montage on Instagram, the Can’t Stop the Feeling crooner is seen carrying his tiny tot from hole to hole. Silas, who stood out in a pink polo, waved to the camera along with his golf-ready dressed daddy as spectators roared with glee.Another moment shows Justin celebrating with his delightful duo after doing well on the green.

Sitting on top of his cheering mom’s shoulders, Silas shouts along. As Justin approaches the pair, he gives his cutie pie a high five, to which Silas happily responds. Then, as Justin Timberlake walks away he pats his son on the back. Silas adorably mimics his famous father, reaching for his back to pat in return. The starry trio matched in polo-styled tees and sunglasses, as they showed up for what was dubbed the tournament’s “family fun day”.

Instagram: @justintimberlake had his two biggest supporters with him at @bassprolegendsofgolf 0:19