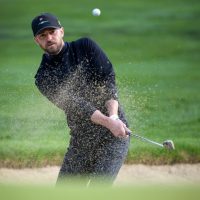 Niall Horan has revealed just how competitive things get on the golf course with Justin Timberlake.

The 26-year-old One Direction star, who is an avid fan of the sport, admitted Justin Timberlake is an ‘annoyingly good’ golfer.

And while he may be a fan of Justin’s music, there’s some level of competition between the two.

In an interview on Apple Music’s New Music Daily with Zane Lowe, Niall said: ‘I’m big into golf. I don’t have enough time to play. I’ve played with some amazing actual professional golfers.

‘I’ve had some great rounds with famous faces who are pretty good at golf. Timberlake (is good).

‘He’s annoyingly good though. He’s so competitive. He’s better than me, but he’s really competitive just with himself’.

He added: ‘If he gets a bad shot, you’re hearing about for 10 minutes’.

Niall’s list of celebrity golfing buddies doesn’t stop there, though.

The Irish singer later went on to namedrop Ghostbusters star Bill Murray as one of his many golf chums.

The Nice To Meet Ya singer continued: ‘I tell you what, this could be the least humble I’ve ever been in an interview, what a legend. He tells the best stories of all time.

‘And we were actually playing in front of a crowd, it was for a tournament. And he had the crowd on the end of a string. They were in stitches laughing at him.

‘He’s just the greatest guy in the world. He was telling some unbelievable stories and good fun to be around’.

When he’s not on the golf course, Niall has been busy in the recording studio.